On March 30, 2010, Abilis Solutions awarded two scholarships, worth $3000 and $2000 to students of l’École de Technologie Supérieure, which is among the top three engineering schools in Canada.

Kien-Van Tram and the Walking Machine Club were the happy recipients of the two scholarships.

They were chosen by an internal committee for their ingeniousness, their motivation and their creativity, as well as their tireless application of what they are learning in the classroom to their personal and professional endeavours.

The members of the ETS Walking Machine Club, represented by their captain Alexandre Gagnon, are just as passionate about their club activities as they are about their studies. Club members are building a robot that must pick up different objects along an obstacle course in under 90 seconds.The robot will compete against the robots of other clubs from around the world. The competition will take place in France and in other places in Europe and their scholarship will help fund this contest. The ETS club members are determined to win, even if this requires several all-nighters to perfect their prototype.

Abilis Solutions’ ETS scholarships give students an opportunity to learn about the company and also to establish a relationship with the ETS faculty. Close cooperation between the private sector and the academic world is essential to meeting the requirements of future employers and preparing students for the challenges of tomorrow.

Abilis Solutions places innovation at the centre of its priorities and is proud to be among the generous donors of the Fond de Développement de l’ETS and to support these young adults and their fertile minds. 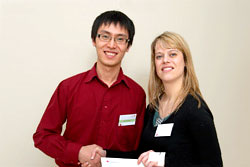 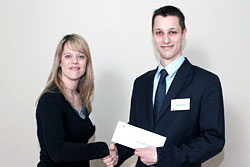 Frédéric Gagnon, member of the Walking Machine Club with Brigitte Mercier during the ETS Scholarship ceremony